Read about Carson City Symphony’s Strings in the Schools program.

The Carson City Symphony was founded in 1984 as the Carson City Chamber Orchestra and gave its first concert in October that year. It is a community orchestra open to amateur and volunteer professional musicians. Members come from all walks of life and have ranged in age from middle school students to senior citizens. The Symphony performs five or more concerts each year for audiences in Carson City. It also has performed in Minden, Gardnerville, Fallon, South Lake Tahoe, Reno, and Virginia City.

The Symphony plays many works by contemporary composers and has commissioned and premiered several pieces. In 1991, the Symphony received a community award from the Carson City Chamber of Commerce for outstanding volunteer services. In 1999, it was selected as Nevada’s Continental Harmony organization by the American Composers Forum and the National Endowment for the Arts. The Symphony Assoc. was named Organization of the Year 2004 by the Nevada Appeal and Carson Access Television in recognition of its contributions to the community.

The Carson City Symphony and Carson Chamber Singers were selected to be part of the Continental Harmony Project for the year 2000. 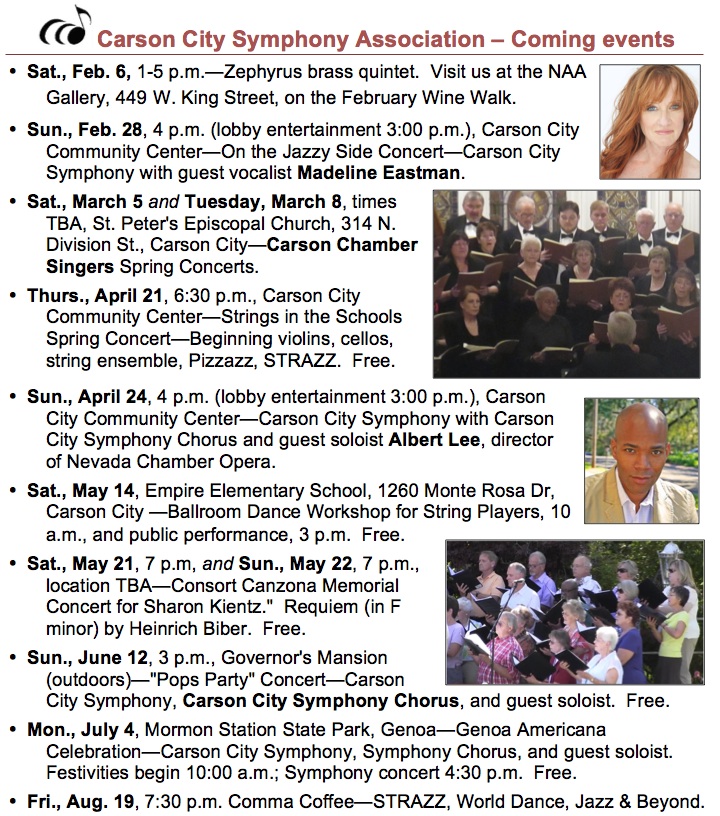 David C. Buglie, Music Director and Conductor, has a Bachelor of Science Degree in music education from Ithaca College, New York, where he studied composition for four years with Karel Husa. He has a Master of Music degree from the University of Massachusetts. In addition to conducting,  he plays classical and jazz piano, tuba, and, trombone, and composes and arranges music. He is also adjunct faculty at Western Nevada College.

About the Author: admin